A while back @dittanym destashed some curtain/upholstery fabric samples on facebook and I was lucky enough to get them.  The fantastic thing about free fabric is it allows you to try out things that you might not have otherwise had the chance to, because although I know I am very fortunate, fabric is very expensive on the whole, and the dread fear of wasting it is often quite off-putting.

Anyway, having this fabric was quite liberating and I thought I would chop and sew and see what happened.  It was also fun having the constraint of working with pieces of a fixed size - on average, they were about 8x12 inches. 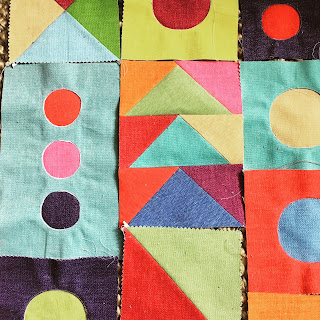 I didn't measure anything, though halfway through the quilt it did occur to me that it would have been at least useful to work in multiples of a particular measurement in order to actually get blocks to fit together!  I did some cutting down to fit and didn't worry about the results, moving things around and discarding things that didn't work like the acid yellow pieces.

I've never tried Pojagi but will have to give it a go as I am getting increasingly interested in the effect of quilts against the light.  I discovered when making this quilt that nasty cheap polyester batting allows the light to shine through beautifully. 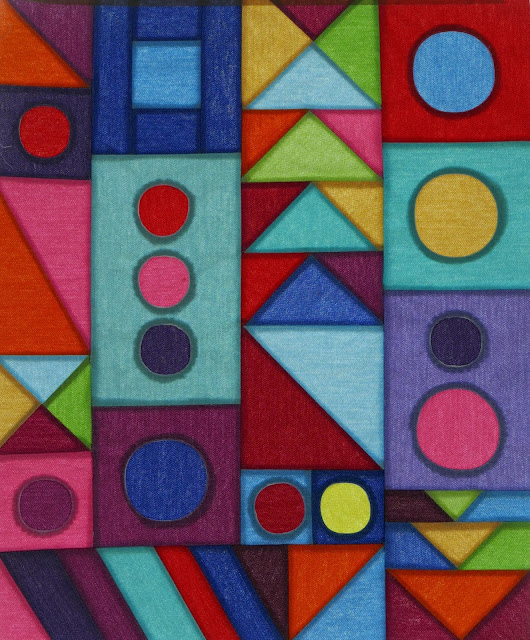 It's now awaiting some decisions on quilting - half of me wants to try out some really major perle stitching, but the other half doesn't want anything to get in the way of the shapes and the beautiful chambray colours of the fabric. 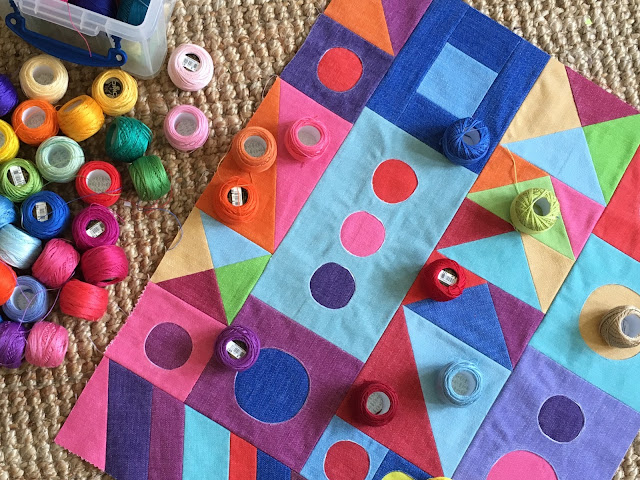 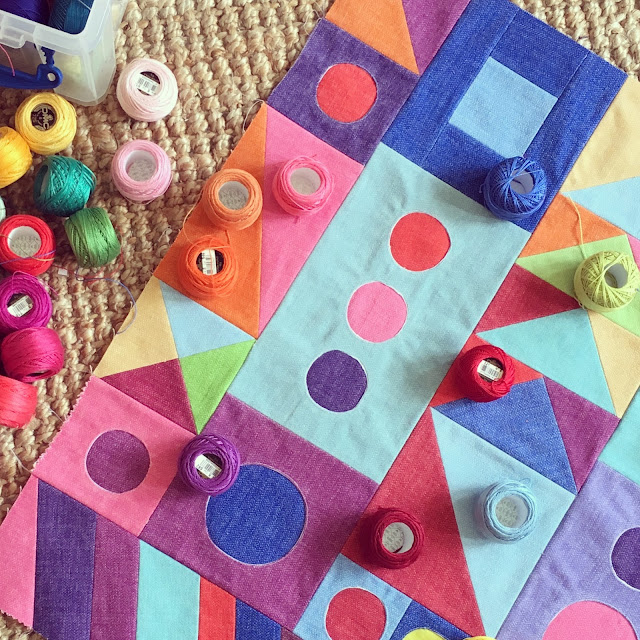 Bear with me because the following story is relevant.  A while back when one of my children was very small and learning about the Egyptians she got very keen on the idea of embalming.  This prompted her to suggest that she could embalm her goldfish.  When we pointed out that she was fond of the goldfish and perhaps we shouldn't hurry it off its mortal coil she said hopefully that perhaps she could get another goldfish that she didn't like as much!

Anyway, faced with dithering about how to quilt the project above I thought perhaps I could make another, sacrificial, quilt and have a go on that to test the effect.  So I made this one. 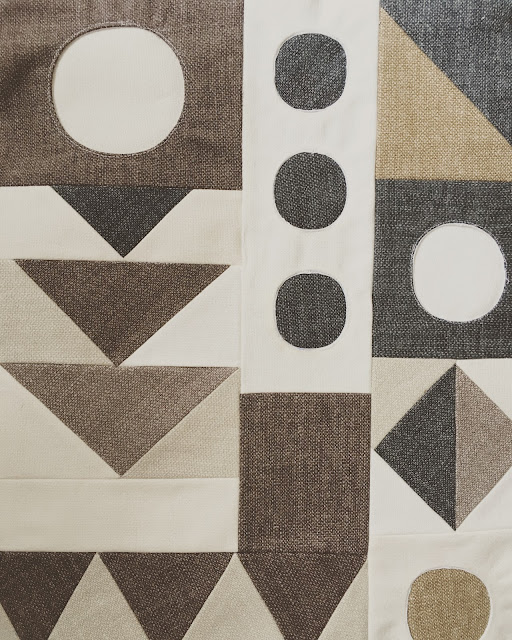 It's made using the neutrals from the same sample book.  I used to do a lot of etching and relief printing and I wanted to get that kind of effect which is a bit hard to capture in a photo. 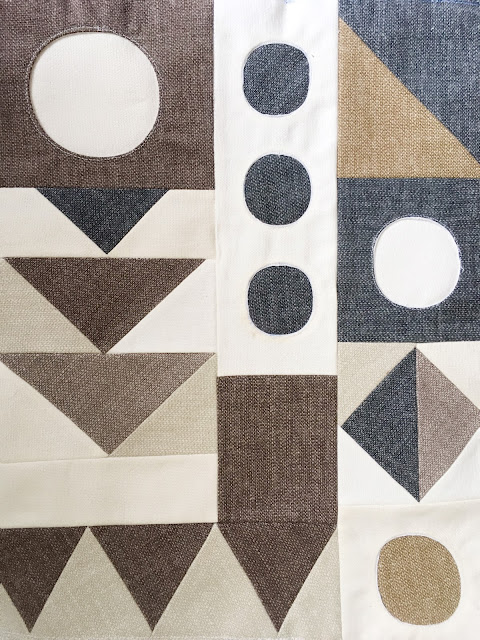 It's only a tiny quilt but the problem is that like a sacrificial goldfish I've got to quite like this one too, and now I'm dithering about both of them. 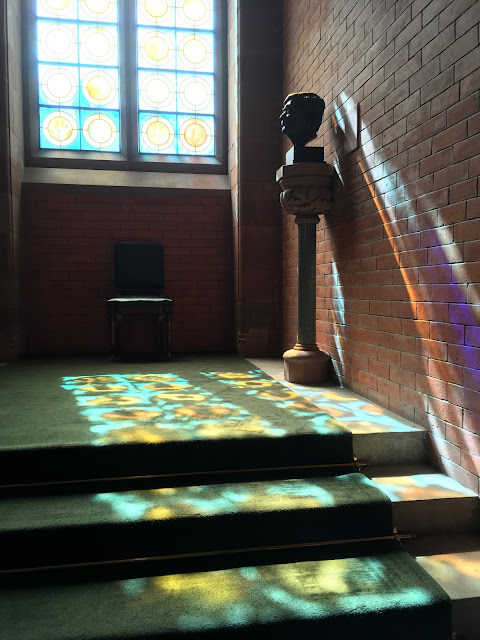 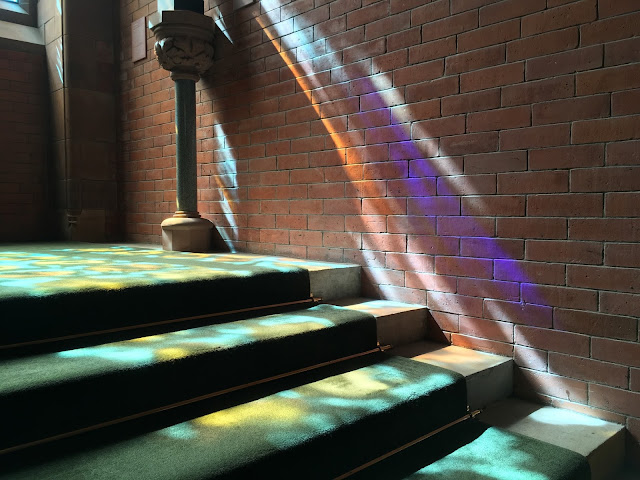 This quarter's theme for Four in Art was chosen by Elizabeth.  Our annual theme is Light, and the quarterly sub-theme is 'Stained Glass Shadows".  I found the shadows above in the National Portrait Gallery, but Elizabeth posted some very beautiful inspiration pictures on her blog here.

I don't have much to say about my contribution - there's not much to explain, except to say that I was fascinated by the way the shadows in Elizabeth's photos read as purple and made use of this colour in my quilt.  I thought for a long time about the challenge, but what I could not find a way to capture what I really liked - the quality of light which she neatly described as 'powdery' - in fabric.

In the end I decided just to try to reflect the saturated colour, and the way that the 'shadows' cast by stained glass lose the definition of the original and become blurred, with colours merging into one another.  I also like the sharp edges and gaps that you see when the 'shadows' fall on a shaped surface. 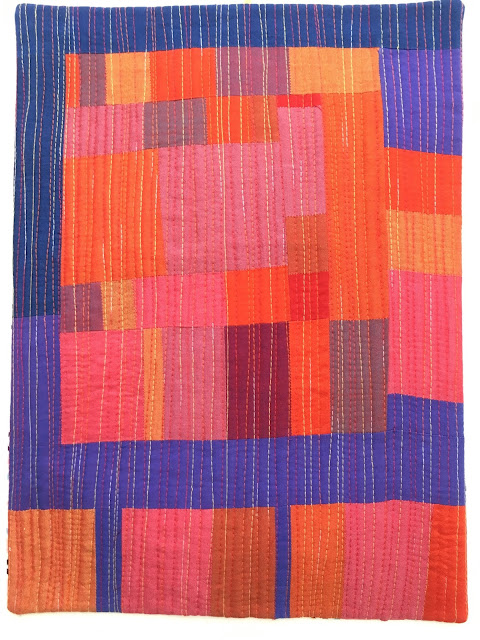 The beautiful colours of shot cotton are as close as I could get to the quality of the colour and light, and I tried to blur the lines of the shapes with heavy variegated Aurifil thread quilting. 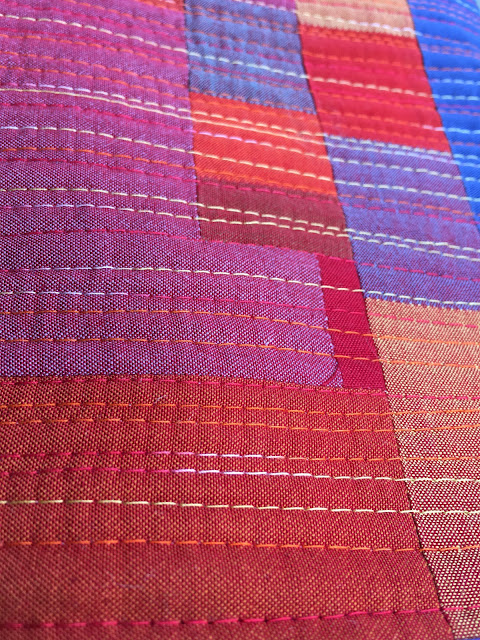 I wouldn't say that this quilt uses any exciting or novel techniques but I have tried to express what I find beautiful in the light cast by stained glass and reflect my response to the theme. 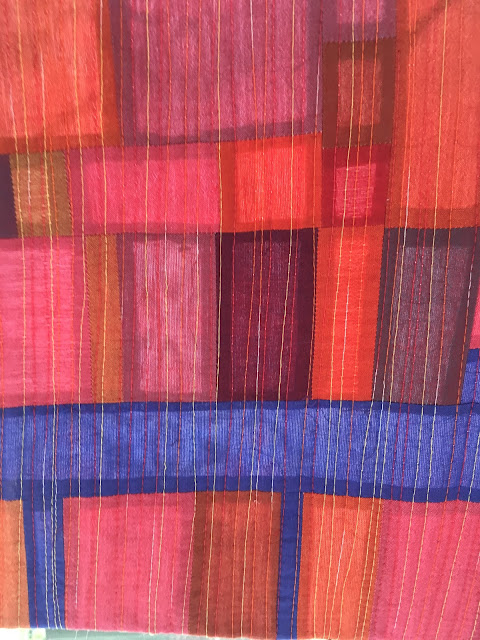 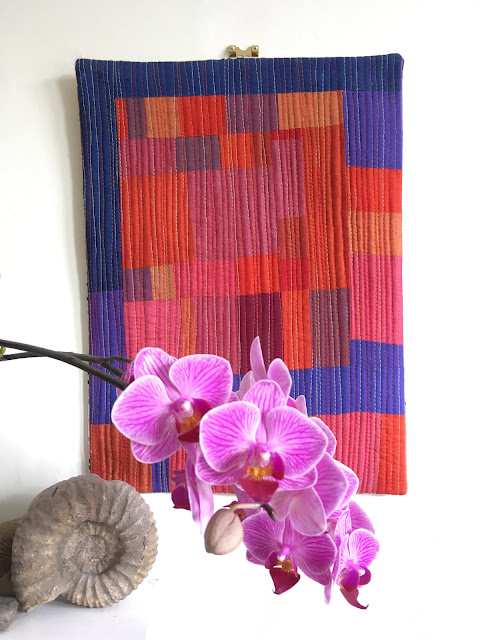 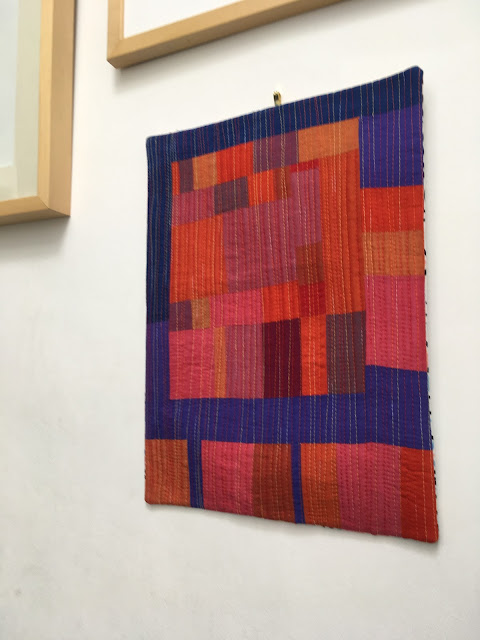 The other Four in Art members can be found below - please do visit them to see how they were inspired by the theme.