The Endeavourers #10, A Scene From a Book, 'My Mistress' Eyes are Nothing Like the Sun'

Today is the 10th quarterly reveal of the Endeavourers, and our theme for the Quarter is A Scene From A Book.   You can find all the members' works on our group blog and I'm looking forward to seeing what scene everyone chose, and how they've represented it.   I feel especially grateful to be a member of the group just now.  While we are all locked down it's reassuring to feel part of something that involves such positive human contact.   But whenever I get the chance to communicate with anyone I'm talking far too much, so be prepared for a long post!

At the beginning of lockdown I didn't feel in any way creative, and was concentrating on doing practical things to prepare for all eventualities.  However I did spend a lot of time thinking about the theme. I initially struggled to think of a scene from a book because I've already turned some of my favourites into quilts, but finally decided on Shakespeare's sonnet No 130 which I love.   (Not really a scene from a book, but a scene from a poem in a book...)
My mistress' eyes are nothing like the sun;
Coral is far more red than her lips' red;
If snow be white, why then her breasts are dun;
If hairs be wires, black wires grow on her head.
I have seen roses damasked, red and white,
But no such roses see I in her cheeks;
And in some perfumes is there more delight
Than in the breath that from my mistress reeks.
I love to hear her speak, yet well I know
That music hath a far more pleasing sound;
I grant I never saw a goddess go;
My mistress, when she walks, treads on the ground.
And yet, by heaven, I think my love as rare
As any she belied with false compare.

I love the way Shakespeare is poking fun at other contemporary poets and their flowery and somewhat ridiculous use of metaphor to describe the objects of their desire.   But while he is doing that he also manages to builds up a picture of his mistress - a real woman who doesn't float about but treads on the ground - who he loves to hear speak and thinks as rare as anyone described with false comparisons.  With social media placing so much emphasis on conforming to a particular, idealised and often artificial idea of beauty this poem has quite a contemporary relevance.

Incidentally, out of curiosity I looked out images of woman of Shakespeare's time.  Being wealthy and important enough to have their portraits painted, decked out in their finest, and on their best behaviour, they often look rather bland and lifeless. The poets Shakespeare teases, with their unrealistic, idealised view don't seem to properly see the real woman, and I didn't get much feeling of the person underneath in these pictures.

However I came upon some paintings by Artemesia Gentileschi and it is worth looking them up. (I was just now adding the link to the Wikipedia article and realised that there was actually going to be an exhibition of her paintings at the National Gallery this year but it has been cancelled because of Coronavirus.)  She used herself as the model for several paintings and her intelligent face is beautiful and full of character, though somewhat sad as she had a rather terrible life which is reflected in some of her grimmer pictures.  I like the way she confronts the viewer. 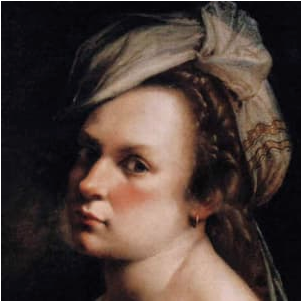 Anyway, that was a digression.  I began by thinking about what I could make with a rather ragtag collection of bits and bobs I had at home.   It was an interesting challenge to use up some of it in my quilt, just as I'm getting creative at making dinners out of what's left in the fridge because of course you can't just casually pop out to the shops.  My plan was to throw these odd scraps into the pot and make a mosaic quilt using them to build up a picture of the woman in the poem.  That seemed to fit the times and to fit the poem which also builds up a picture with each line.   I thought I would make something quite colourful and down to earth. 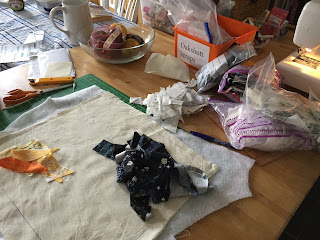 However, when I started laying out fabric, another quilt started to take shape by itself.  It moved totally away from the original colourful mosaic idea.   I like this about making pictorial quilts - it's a fairly leisurely process and you're not committed until you sew.  Things sometimes take on a life of their own.

My black-haired woman was cut from one small piece of black Oakshott cotton, which was fused to another piece of cream Oakshott, then the whole thing was machine appliqued to a pieced and quilted panel I had made for another project and not used (the section in the middle of this quilt). 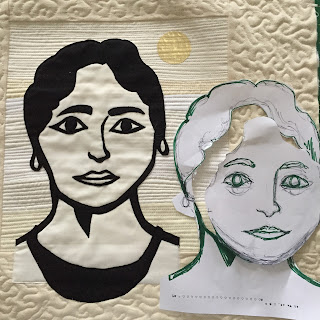 I found a bag of scraps of batting in a drawer under my bed (yay!) and 'frankenbatted' them together to extend the size of the panel by sewing them round the edge.  I had cut some calico from the back of a mini quilt, which I had planned to use as a substrate for scraps in the mosaic quilt plan, and that turned into the border.   I had a tiny piece of gold silk, only just enough for the sun.

I took the above photo in the sun outdoors so that the shadows would show up the quilting. She's not the colourful earthy woman I intended to make, but there you go!  I wanted to make an image of a woman who asserted her personality into the picture, so she is framed by the border around her but is not constrained by it. She has a direct gaze and I tried to make her to look as if there's more to her than what you initially see. 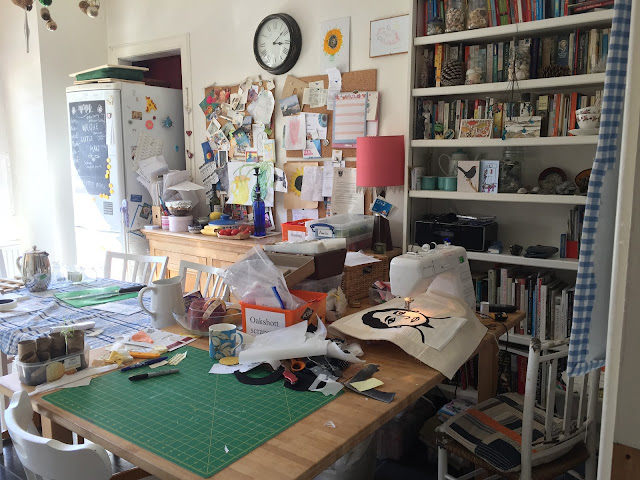