Today is the reveal date for the latest piece for The Endeavourers art quilt group; our theme for this quarter is Memories. It's a broad subject covering a lot of possibilities so I am excited to see what my fellow Endeavourers have done!  You can find out here.
As usual, it was lovely to have such a thought-provoking theme to mull over! To begin with I wondered about making a scene illustrating a particular memory, then about trying to represent the biochemistry of memory and the way it depends on synaptic connections between neurons.
Finally, I started thinking about the relationship between our memories and who we are - the way they contribute to who we are as a human being. We can have experiences but it is the memory of those experiences that allows us to learn and change and develop as a person. Memories are layered and stitched together, colouring and shaping our personalities, and our attitudes to the world.

While I was wondering how to translate this idea into a piece, I thought about the treasure box I keep under my bed, as I'm sure many people do, and about the way the objects in a collection like this represent their owner's individual memories. The collection as a whole is more than the sum of its parts too and also reflects the owner as a person.

In fact a person is like a treasure box - we are all treasure boxes! Together the box and its contents symbolise us as the keepers, and the product, of our memories.   So here is my imagined 'Treasure Box'. 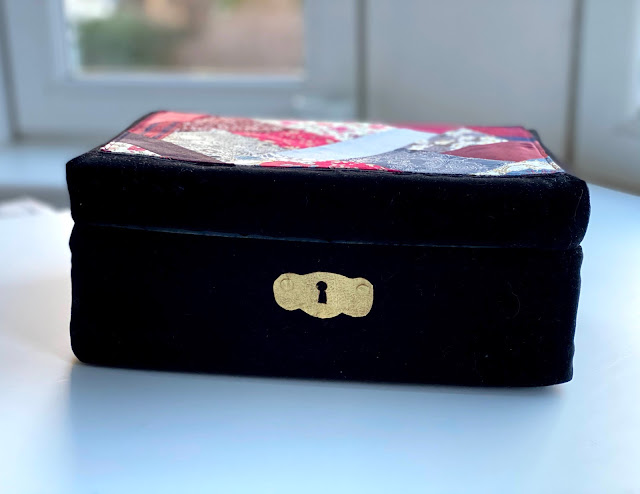 And it is not a quilt! This is my first 3D textile work for the Endeavourers, and I have made what is supposed to look like a precious lacquerware box, full of treasures. The box is stitched together and the lid is made using crazy patchwork to represent the layering and stitching together of memories into a person, with different shapes and colours representing the variety of memories. 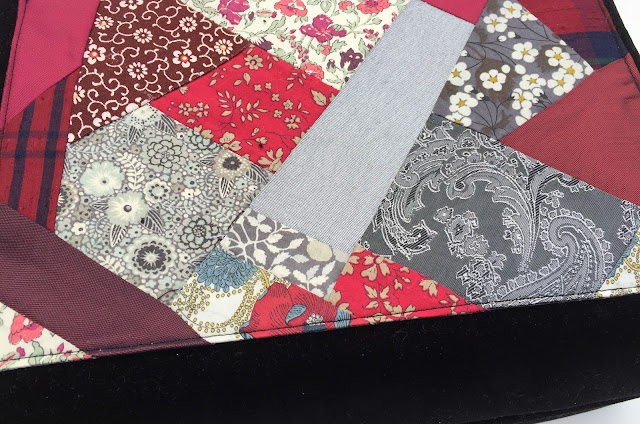 This variety of memories is also shown by the treasures on a bed of tissue paper inside; a couple of shells, a baby shoe, a dried corsage or buttonhole, some old pine cones, a fossil, and a conker, while the choice of objects gives some clues about the person it belongs to. 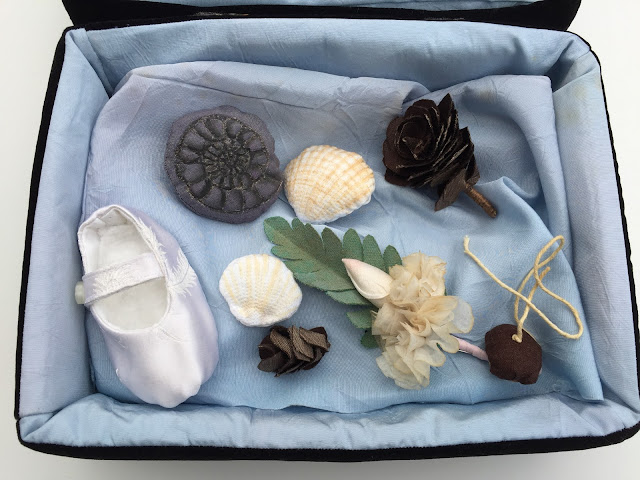 Here is a closer look at the contents of the box and the pieces (all made of fabric) that I made to represent what is important in the imagined life and personality of a particular human being.
: a little Douglas fir cone  and a larger Scots pine cone. My own treasure box has a cedar cone which is a reminder of a very long ago family picnic with my Grandma, during a sunny summer holiday. I thought that a fir cone might seem like a trivial thing, but in terms of memories represent something very significant. 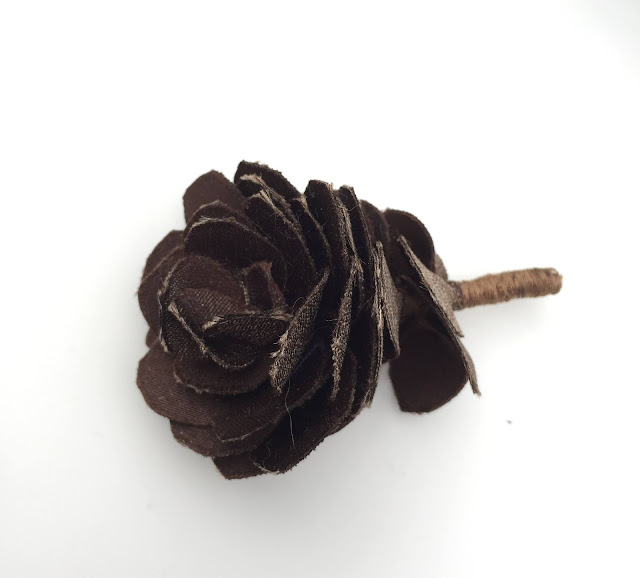 : a couple of shells, kept as a general reminder of jolly walks on the beach, or of one special trip.
: a fossil, since they are treasures in themselves, but also represent many happy hours of fossicking. 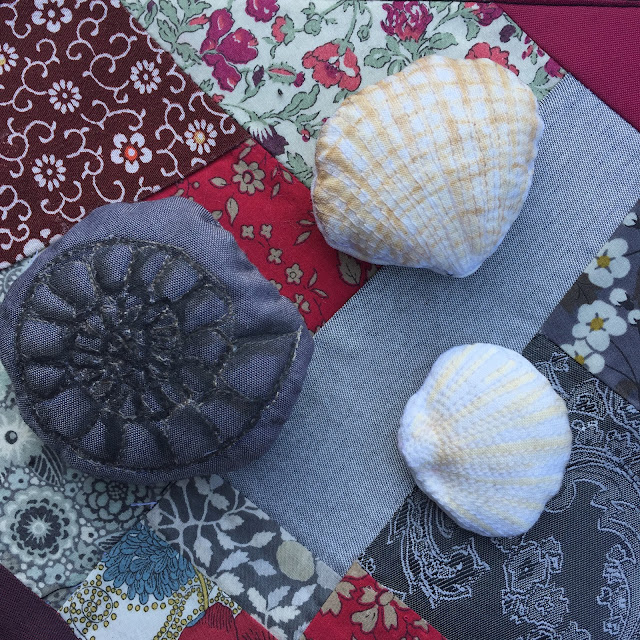 : an old conker on a string. Maybe a reminder of childhood games, but also, like fossils, times spent scuffling around looking for them and the magic of finding a good one.
: a dried corsage/buttonhole saved from a happy or romantic occasion - a wedding, or an important dance, maybe. 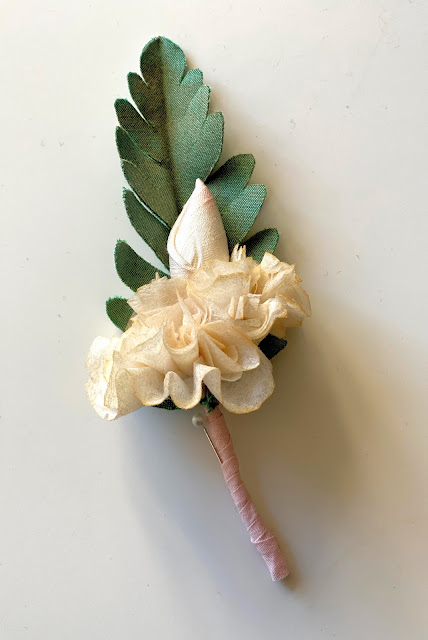 : a baby's shoe. (When my oldest daughter was very tiny, she seemed to grow much bigger during the day by force of personality, and it was only when I saw her shoes after she had gone to bed that I remembered how little she was!). This shoe is made from satin silk. Perhaps the owner made it from scraps of a wedding dress. 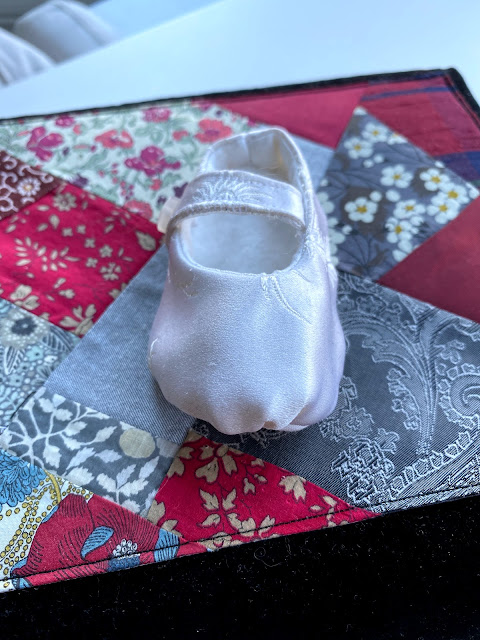 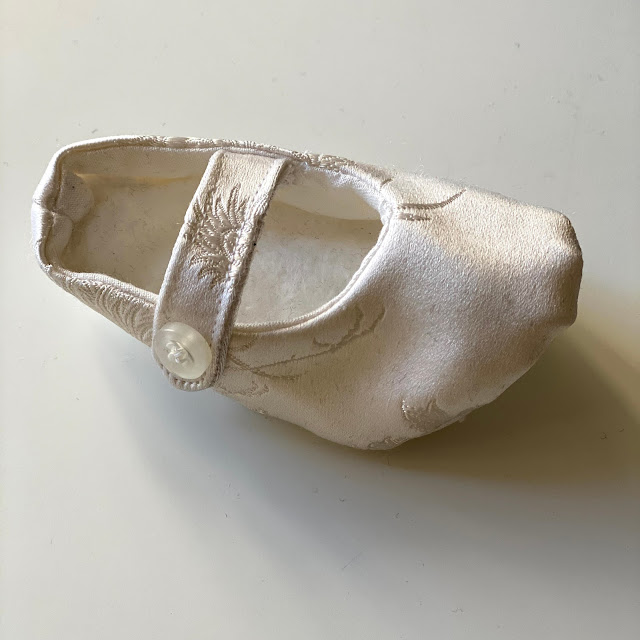 : and hidden away inside, there is a tiny box (Treasure Box's mini-me) because there are some memories locked away that we perhaps don't take out very often, or share with other people. 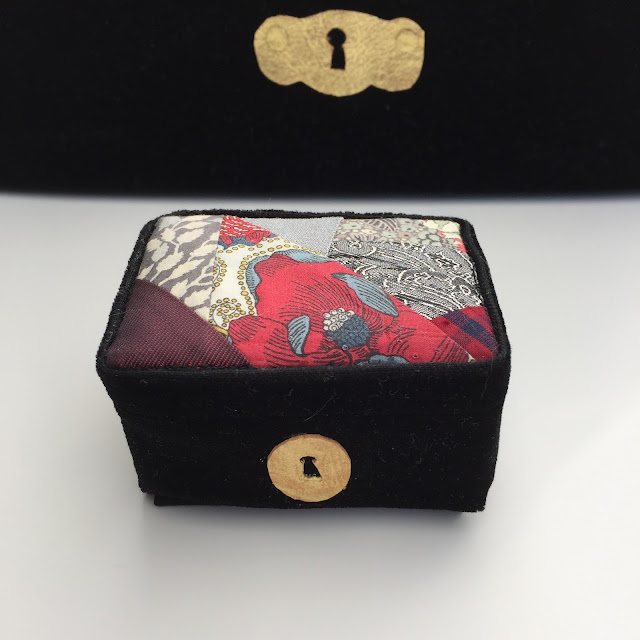 For some treasures, the significance of the memories might be common to many people, but for others we can only guess at their importance and the effect that they have had on their owner.
When I was working on this piece I thought a lot about the film Blade Runner - as an exploration of how memories contribute to your identity and what it actually means to be human, you can't get much better! The replicants in the film began their 'lives' programmed with a set of someone else's memories, but they have also made their own (they have 'treasures' too), so they feel, and want to be understood as, human. I love Rutger Hauer's final speech - more of a poem really - which makes it clear that he is no less human or important than anyone else.
'I've seen things you people wouldn't believe.
Attack ships on fire off the shoulder of Orion.
I watched C-beams glitter in the dark near the Tannhauser Gate.
All those moments will be lost in time, like tears in rain. Time to die.'
When our memories are lost, part of who we are begins to fade away. But even at the end of our lives we live on for a while in our 'treasures' and in other people's memories until eventually these are lost too. 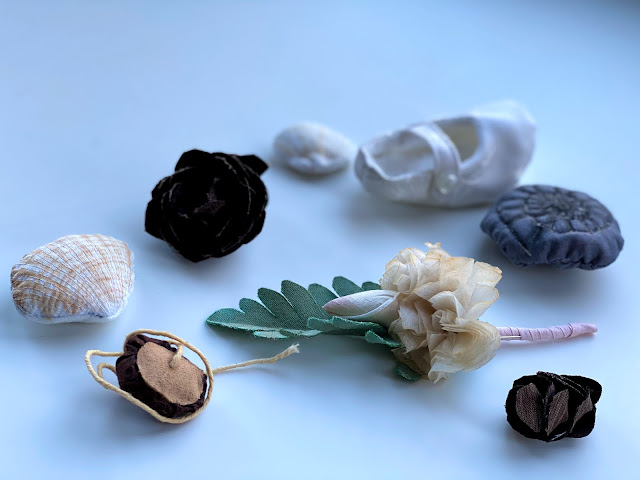 ....
Making the Treasure Box has been such a distraction from current events. I really enjoyed thinking about the imaginary owner of the box, and what might be in it.
I set myself two challenges: 1. to make a piece that was constructed only using textiles and stitch, and 2. to only use materials I had rather than buy anything new.  The first was partly to fit with the aims of our group as a textile art group, but both of these also seemed very important to fit in with the idea behind the piece.
Apart from some jewellery wire in the stems of the corsage I nearly managed the first challenge. Almost everything is textile and sewn together, but I had to resort to using some glue to secure the padded lining inside the lid and to fix the hinges and key plate. I just couldn't work out a stage in the construction when I could sew them on/in and be sure they would end up where they were supposed to be, and I couldn't force a needle through them afterwards!
The second challenge was very satisfying! I was able to use up some tiny scraps of flimsy interfacing to make the carnations, and fabric 'crumbs' went into stuffing other objects.  The fir cones were made out of a piece of furnishing material reclaimed from a sample book. 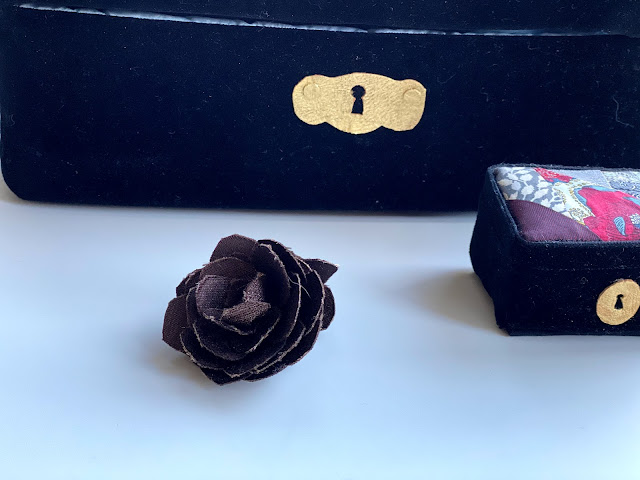 The box is reinforced with some stiff tapestry canvas, which I happened to have in exactly the right quantity, and is made from black velvet cut from a torn old favourite jacket. Sewing it all together was crucial to the idea but I did occasionally wonder why I was putting myself through this torture when it would just have been an awful lot easier to wrap fabric round a cardboard box!
The hinges and lock are made of scraps of suede painted with metallic fabric paint. 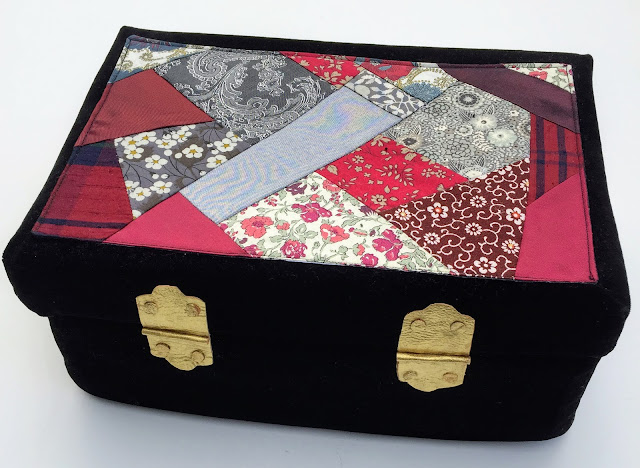 For final decorative details I used cold tea to age the corsage (dipping in the carnations, and then putting some of the damp tea leaves on the fern and leaving to dry) and I used watercolour on the rosebud and shells, and to add shadows to the quilting on the fossil. It took a while to think about how to make each object but as the box and its contents symbolise a human being and their memories it felt very important to try to make everything look as precious as possible. 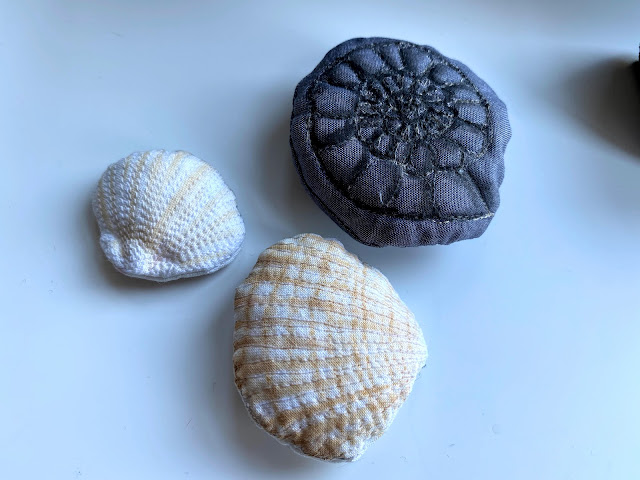 Sometimes I wonder about the point of making things (me, not anyone else!). Occasionally it does seem a bit pointless, but putting a rather obsessive, and possibly rather mad, level of effort into this box was a lot of fun and I decided that that is really the point, it shouldn't matter about the circumstances or the result, or what anyone thinks, and anything is a worthwhile endeavour if it makes you think about and see the world in a different way. 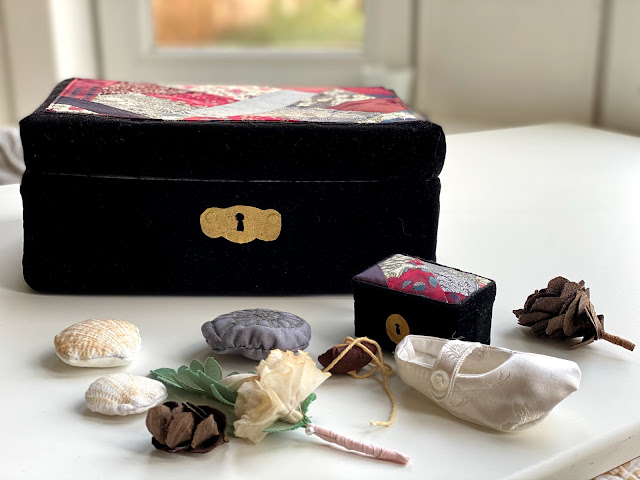 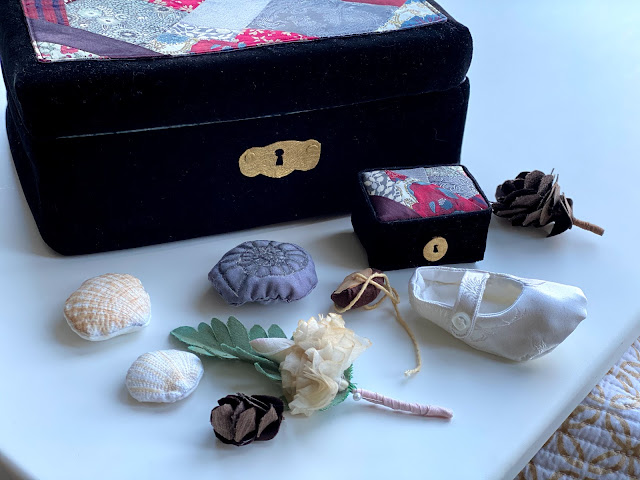 So thank you very much again to all the other Endeavourers for making this such a great group to belong to, and do please have a look at what they have come up with.