A couple of people had asked if I had painted my Moors quilt, so I thought I would just give a bit of information on how it is constructed.

The central panel is made by curve-piecing strips of 14 different fabrics together. If you haven't discovered curve piecing before it is very satisfying - and you can find tutorials online.   (My first attempt and things I learned from it are here.)   I included quilting and shot cottons, klona, calico and linen for variation in texture, and starting with the darkest of various shades of grey at the top, fading to a pale neutral, then onto beige and through various shades of brown. 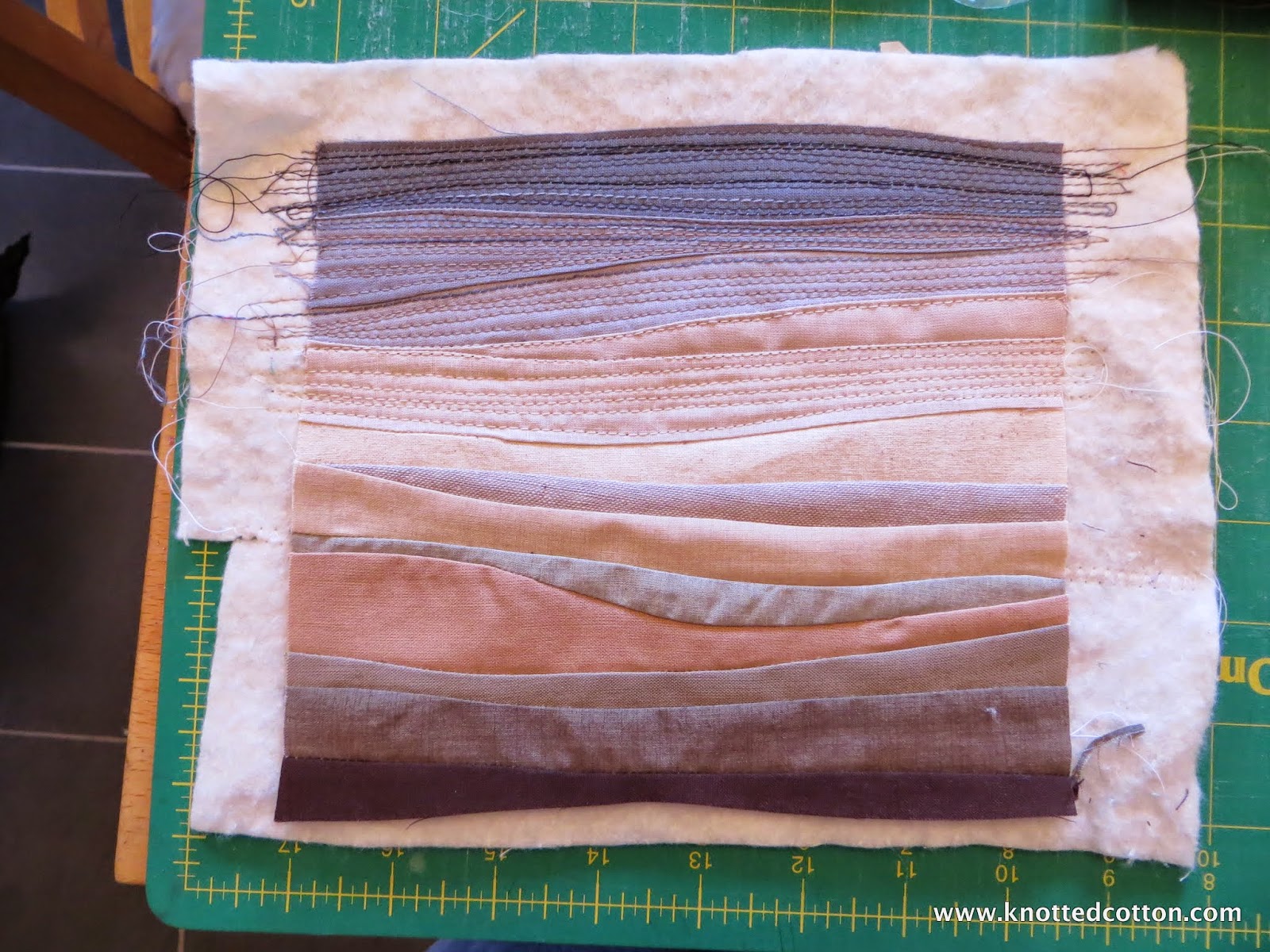 Quilting added a lot of colour and also softened the transition in colour from one strip to the next.  I used black, grey and a grey/blue/green variegated thread at the top, gradually changing to various buff and brown threads. Then I started adding in some lines of green, and a range of heather colours, from dark to light pink to suggest moorland vegetation.  Just as with the fabrics, the threads are all different weights and fibres. Sometimes you have to take advantage of things that happen by themselves - I deliberately left some strips unquilted because the slightly puffier texture seemed just right for hinting clouds or different layers of landscape/vegetation.  Halfway through, I fused on the dark strip of fabric in the middle because I felt it needed it. 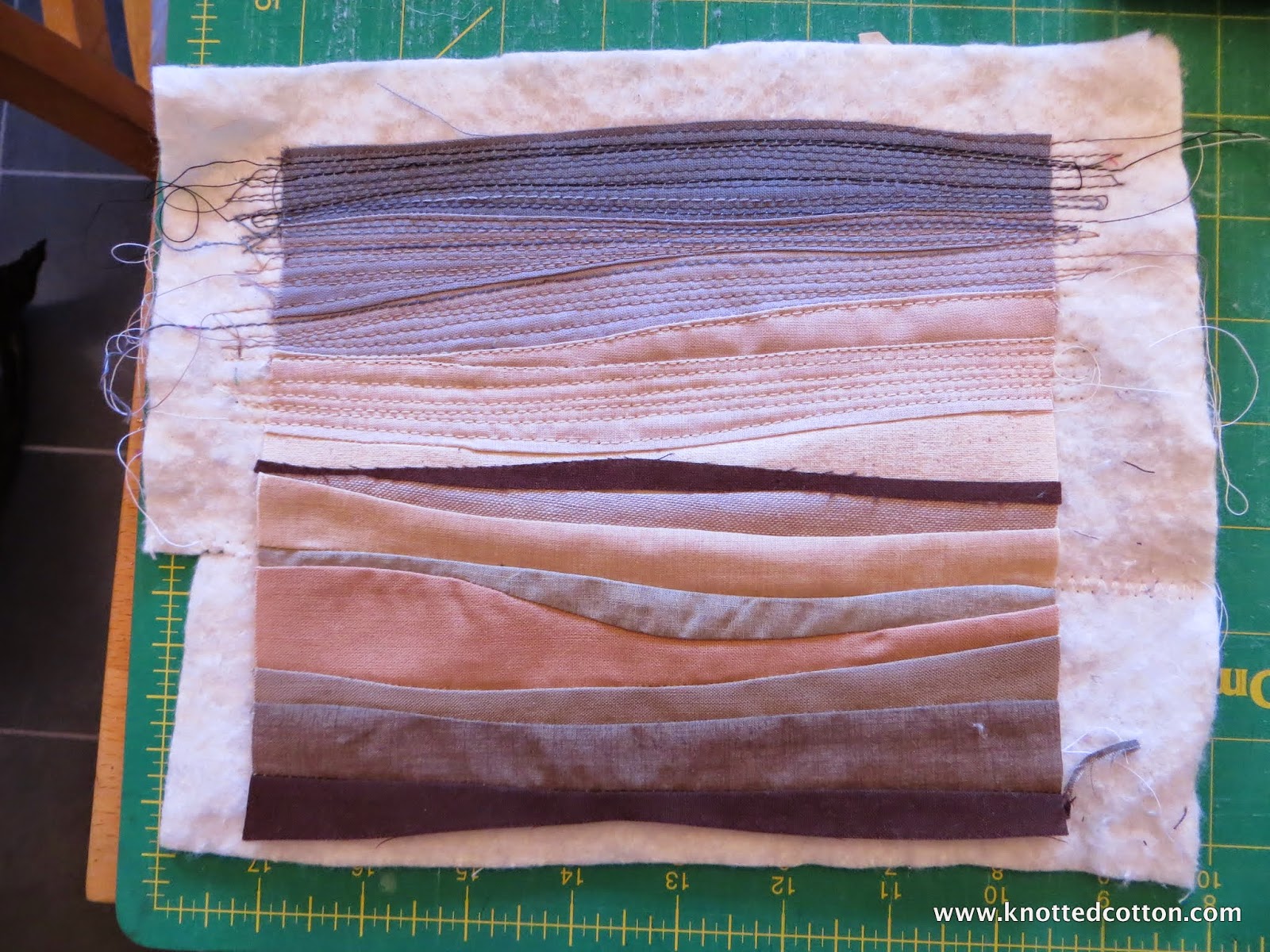 It was interesting to see quite how much thread colour does affect fabric colour.  In the pic below the brown strip in the middle is the same fabric as the one right at the bottom, but even a few lines of deep pink quilting gave the bottom one a purple tinge.  Similarly the fabric which looks green in the pic below is actually a beige brown - if you look at the first picture in this post you can see how it looked before a couple of lines of green quilting just outside the ditch between it and the adjacent strips. 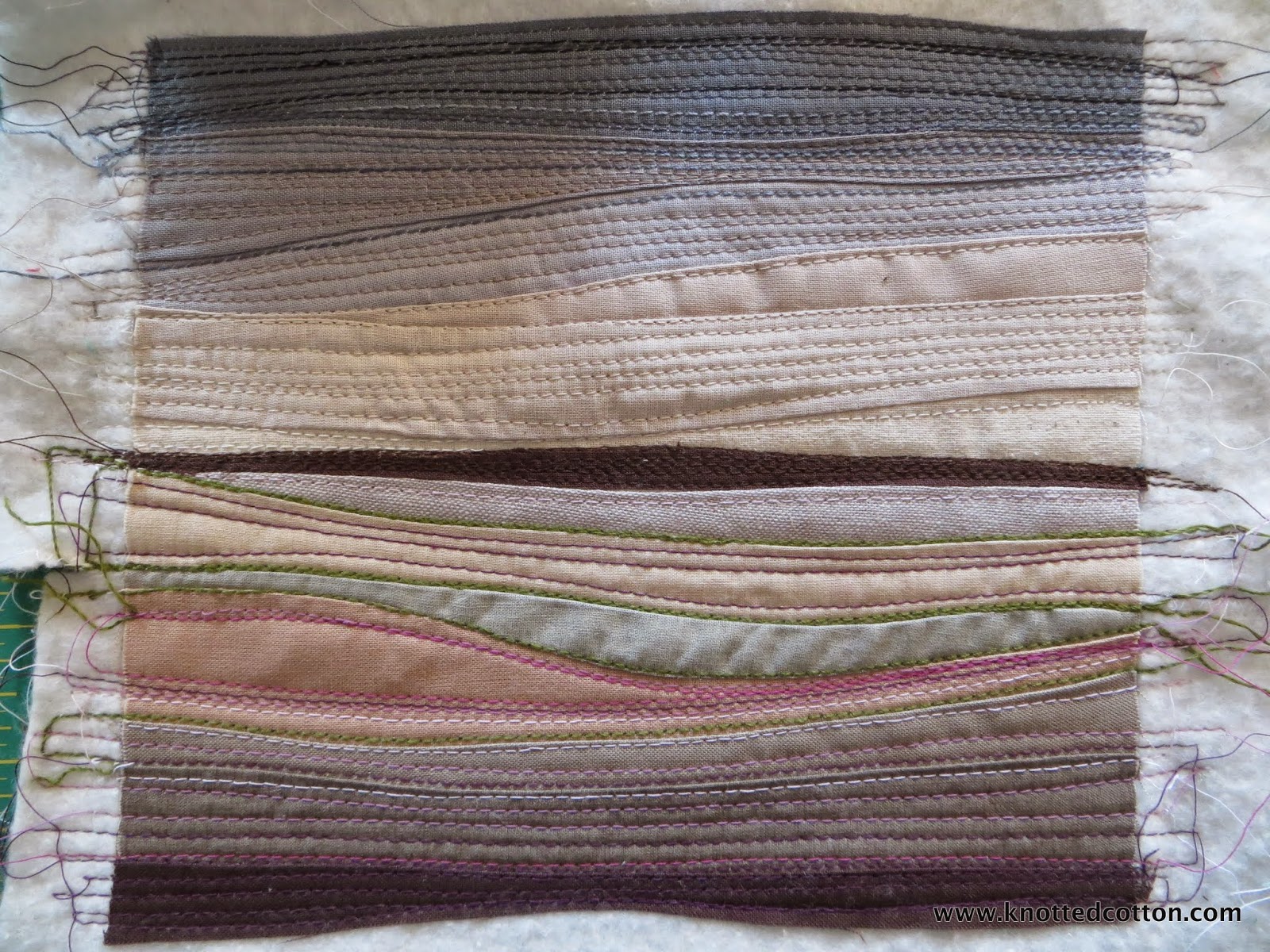 I trimmed away the excess batting and added some fresh strips all the way round to bring it up to 12 x 12 inches, which is the agreed size for Four in Art quilts, then made a kind of 'mount' for the picture with an off-white Oakshott leaving the top edge of the pieced section curved.  I mitred it, because that seemed the right thing to do, but it was very fiddly - I should have followed a tutorial!  Then I added the binding in one of the browns - a textured solid - to look like a frame.

There is the usual list of things not to do next time.  (The subtitle of this blog should be "Learn from my mistakes")

- My carefully measured angles in the mitred border don't actually line up with the final corners of the quilt  - partly because I forgot to take into account the fact that the central piece isn't actually square whereas the quilt is.
- There is a join in the binding which is right next to one of the corners.  Careless.
- There is a tiny piece of red lint trapped in behind the border.  Luckily it only shows through in a particular light.  This is even more shameful because I have done it before...  I mention this as a cautionary tale.  Obviously it is as important in quilting as in cooking to keep your work station clean...