and the weeds has riz, so this is what I've been doing recently. 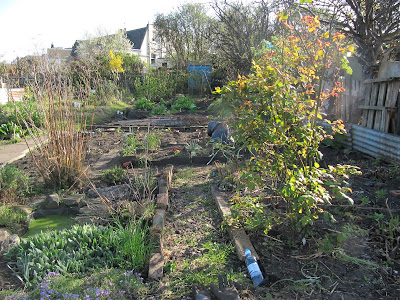 My allotment - a big (and perennial) WIP.  I gave up on the traditional rows of veg a while back and the most productive thing I ever did was to divide the allotment into a series of narrow strip beds with paths in between.  This made it easier to weed by hand and manage a better crop rotation (where you don't plant the same kind of veg in the same spot year after year, as it isn't healthy for the soil).  It wasn't very aesthetically pleasing though (fussy!) so I'm in the process of dividing the beds up further.  What I will lose in making more path, I hope to gain in beauty and better organisation (that's the plan anyway...)

Favourite thing here - my pond!  It was built using the smallest and cheapest hard plastic liner you can get and it's about 2 and a half feet long.  Despite this I came down last summer and found seven frogs peeping out of the water. This makes me very happy. 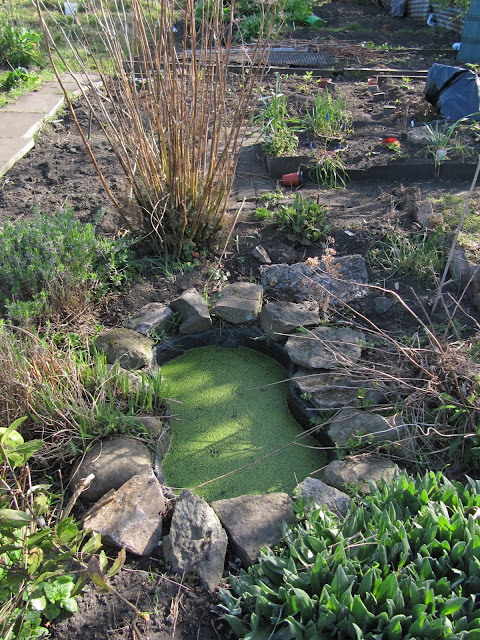 I'm so lucky to have an allotment - the waiting list for one here can be longer than seven years, depending on whether you are in the posh part of town or not. I've had my plot for several years now though you might not think so from the lack of visible perfection! I have learned to never get too smug about it - one year you think you have it magnificently under control and the next year weeds/weather/babies take over and back to nature it goes!

Despite the forecasted change in weather, we're still basking in glorious sunshine here and the feeling of things coming to life is wonderful.


Hope you're having a lovely weekend.

PS: you might like to check out the fabric giveaway for followers over of Pings and Needles which I obviously hope to win:-)  I'd add at least some of this fabric to the quilt I've pledged to make for Siblings Together (you can find all the links to this charity quilt scheme in this post).   Patchwork Queen has already very generously offered to donate me some from her stash.
Posted by Catherine at 20:17

Email ThisBlogThis!Share to TwitterShare to FacebookShare to Pinterest
Labels: Gardening