First thing this morning,  I had another go at the snowflakes.  This time I used button stitch round the edge instead of zigzag and, as Amy suggested, I left more of an allowance round the edge which I trimmed off afterwards.  These ones are much neater.  I also stuffed them, so didn't use a stabiliser as suggested by Katie, but I definitely would have acted on this otherwise as I'm sure this would have helped with the fraying. Thank you both for your advice!

Instead of hanging them on a cord, Sprog One thought we should turn them into a mobile, which we did using a couple of pieces of driftwood.  I just couldn't get a decent photo of the whole thing and the one I did get is slightly marred by the open bottle of wine (hic!) and attractive central heating boiler. It does look quite jolly and festive! 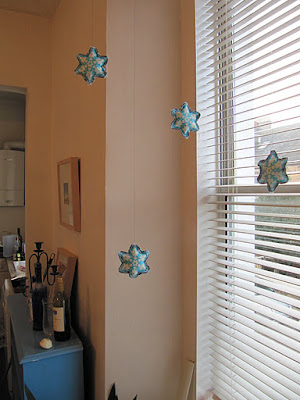