We were stuck in yesterday with colds and sniffles so Sprog One and I were casting about for something to do.  We made this little bag and then miraculously we found some left over fabric paint which I'd forgotten about - just enough to print this fern from the garden, using a rolling pin.  The photos don't really do justice to the effect which is very pretty as the fabric paint is faintly sparkly.  I would have waited for daylight to take the pictures, but I'm not anticipating there being any! 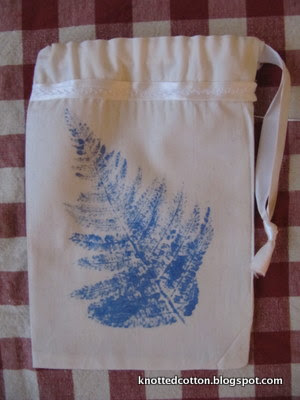 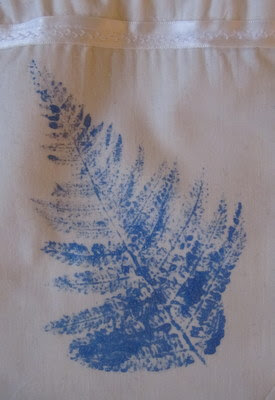 In a further spirit of endeavour, my husband and I  (how do you say that without sounding like the Queen?) also managed to take the back of our fan oven off last night and replace the element (it's only taken a month for us to get round to this).  I'm not sure why I'm blogging about it, except that doing it was part of the New Regime of Having a Go, and Getting On With Stuff, and since we appear to have succeeded I am feeling insufferably smug and also very happy because it does mean that bar further oven disasters I can now cook the Christmas turkey, which was a fairly major concern.  Weyhey!
Posted by Catherine at 09:53